A Bank Holiday Scaly One

With Bank Holiday looming I had decided upon a longer session. The better half was visiting her father in for the weekend so I planned a 4 night stint on The Match Lake at Yateley and Sunday night into Monday with my pal Rob on an easier local water, just for the social aspect. I had booked a couple of days off work so I left there at 2pm on the Wednesday and after a short stop at the tackle shop for a few things and arrived at the lake in horrendous conditions. The rain was just a drizzle on the way but when I got there it started to pour.


First thing I did was to find Spike, he was also down for a longer session so to find him, seek shelter in his bivvy and steal a cup of tea was my first job. Whilst drinking tea and chatting about the prospects of the session, one of his rods tore off and after a few minutes he landed a wonderfully proportioned Mirror Carp of over 24lbs. We did some pictures and returned the lovely fish. Seeing all this prompted me to don the waterproofs and unload the car ready to set up camp in the point swim.

Once the bivvy was up and all the items of tackle and bedding were in place I made tea and waited for any indication that the heavy rain would ease long enough for me to get some rods out. As it happened, it got past 8pm and it was still coming down relentlessly. So, it was back on with the waterproofs, in with the bank sticks and three baits were cast in the direction of the island with a dozen of so scattered around each one, not ideal but at least I was now fishing. Soon after retiring to the bivvy the light began to fade and night time was near. I made supper and climbed into the bag, soon I was fast asleep.

Back in the Bay

Friday 18th June, after 3 weekends off I was back on the for a one night session. I arrived at around 1:30pm and walked the lake hoping to find some fish occupying the bottom bay. As I approached I saw quite a bit more weed than when I was there 3 weeks ago, although, amongst the weed were Carp, lots of them too! I dropped my sleeping bag into the swim and trotted back to the car to get the gear. I loaded the barrow, looked at it and was quite surprised as to how little I actually had with me, easier to push, then it dawned on me, No Bivvy!! This was going to be fun, it was warm but the sky was grey and looked very uninviting. I rang round and left a few messages but I didn’t hold much hope of anyone coming to my rescue.


Once I’d found three nice spots to fish to, baited up and unloaded the barrow the fish that were there were more displaced and fewer in number, but that was inevitable. A few remained so I was still happy with swim choice, once the noise of me setting up has ceased I was sure they would return. By 3pm the rods were fishing, I made tea and set up the bedchair keeping one eye on the sky. 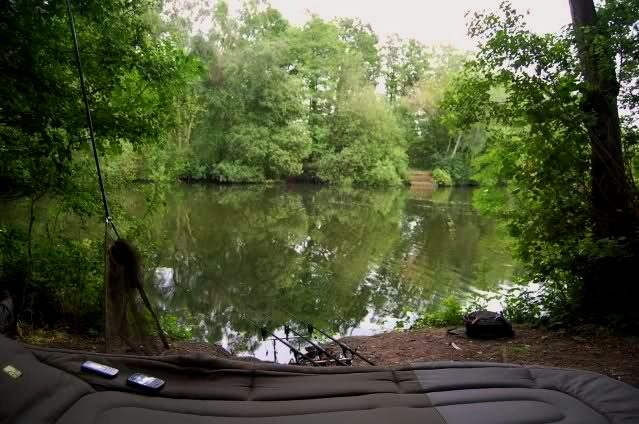 At 6pm the rain started, not heavy but enough to get me and all the gear wet. I was pitched up under
some tree foliage but it wasn’t helping much. Just then I remembered that during my last session I had unzipped my bivvy front and put it in my unhooking mat. With a bit of planning I tied each end between two trees and strung the front out on two storm poles, I had a shelter!! 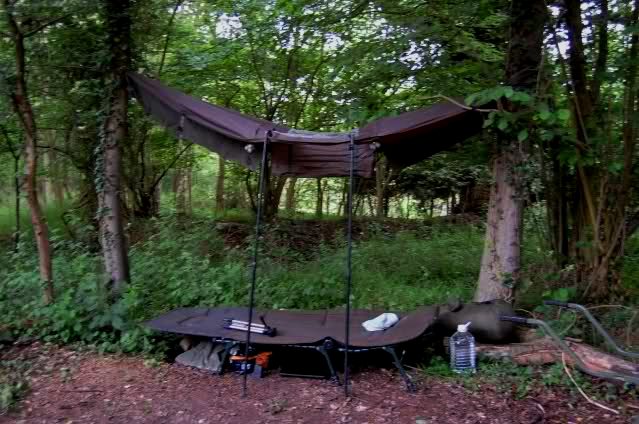 Just as I had finished my shelter I heard an alarm singing, the left hand rod was away. I bent into it and it tried dearly to reach the snags, I applied steady pressure and steered it clear, then it changed direction and charged right so I quickly dropped the tips of my other rods. A few minutes of steady plodding and I netted a nice double figure mirror with a nice scale pattern. On the scales she went 15lb 4oz, a nice welcome back present. 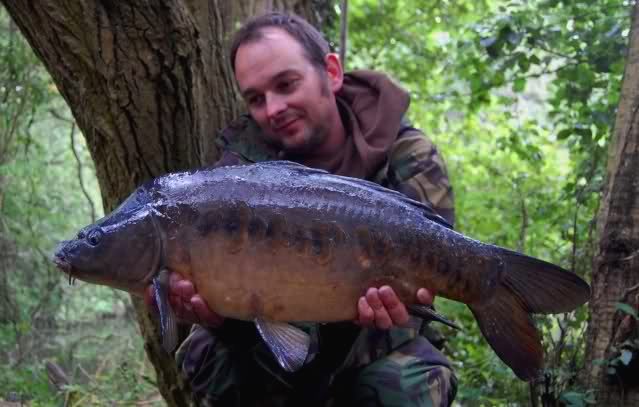 I returned the fish, repositioned the rods and made dinner, Beef casserole. I put the radio on ready for the game and relaxed under my makeshift shelter. After the match I noticed that the rain was getting slightly heavier. It was starting to get dusky and the corners of my sleeping bag were getting dripped on. Just then I had a few bleeps on my right hand rod which was just up the margin. I crouched over it and looked out to find a sheet of bubbles rise over my spot. Within seconds it roared off, I struck and could tell straight away I was connected to a Catfish, bouncing along the bottom of the lakebed sending up huge sheets of bubbles as it bored away into the weed. It was quite some battle but eventually in the half light I netted the beast. It wasn’t very big, defiantly over 20lbs though. I had to land this one as it had taken the hook quite far back so needed the forceps. Whilst it was out I got a quick snap for the album and returned it.


I got back onto the bed trying to dodge the raindrops. At 10:40pm I received a fast take on the middle rod, I ran out with just my socks on, (the floor was wet, not a good idea!!!) lifted the rod and felt a carp on the other end I got it away from the snags this time by walking back up the swim, I got it out into open water only for the hook to pull. I was gutted, I cast back out onto the spot as best I could in the dark, the spot was only 30 – 40 yards out but was in a small gap between the overhangs. Once again into the bag and now I had Mosquito’s buzzing al around my head, along with the now even heavier rain, I buried my head and went to sleep.


I woke a little after 6am, no rain and the sun was trying to peer through the clouds. I freshened up the rods and started to hang up the stuff that was wet. By 8am the sun really started to warm things up so the ritual of firing out mixers began. 830 and the left hand alarm went into overdrive, I went through the usual routine, walking up the bank to steer it away from underwater obstacles and once in open water it was a case of trying to tire the fish out all the time praying thee hook didn’t fall out. I landed a lovely dark mirror of 20lb 2oz, what was destined to be a nightmare session was shaping up to be a good one! The shots were done and fish put back I was fishing again by 9am, still early doors and plenty time to bag another. 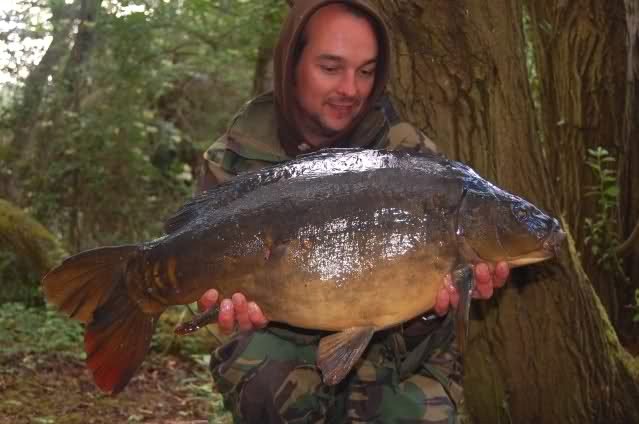 By Midday the breeze had strengthened and was quite chilly, the sun popped it’s head out now and then but on the whole it felt cold. The odd fish drifted in and out of the bay but the rods stayed still. At 1:30pm, whilst making lunch, I received a half take on the middle rod which came to nothing. Lunch was pasta and meatballs and two cups of tea. I freshened up the baits after lunch ready for the tea time feed.

Unfortunately the tea time feed didn’t happen, all afternoon I relaxed and watched Kingfishers, Jays and Herons. I tried to get the floaters going but the Seagulls soon put a stop to that. 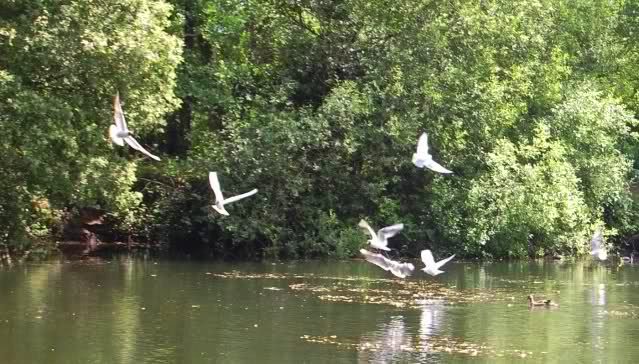 By 7pm a few dark clouds started to drift over, I didn’t much fancy the prospect of getting al my stuff, which was by now dry, wet again. I slowly started to pack things away. It was an enjoyable session and it was good to be back, I was already looking forward to next weekend’s trip. All that remained was to stop of at KFC on the way hope and have that celebratory meal I have when I don’t blank. 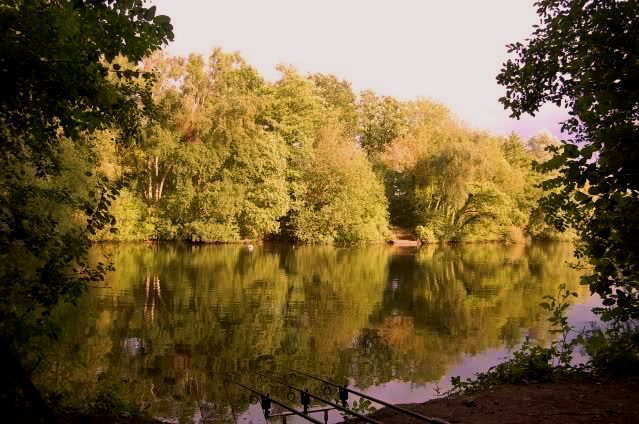 Posted by The Sweetcorn Kid at 12:44 No comments: Links to this post

Friday 4th June, a blinding day and at 12:30pm I left work and headed home to load the car ready for an extremely special weekend. Funnily enough there was to be no angling involved, but a weekend work party at Redmire Pool. After a few hours of stop start in the Friday rush hour, I finally arrived at Bernithan at 6:30pm. I found myself to be the only one there; I guessed the others would arrive in the morning. As soon as I parked the car I walked to the dam, looked out over the pool and took a deep sigh, the most beautiful sight in carp fishing, Redmire in her summer colours. She looked spectacular, almost untouched.