Beauty and the beast....

Last evening I arranged to meet Rhys at Tithe barn at dusk, there is a night fishing curfew on there right now and it needs regular patrols to ensure everyone is sticking to the rules. I managed to get away around 6:30 so thought I’d stop off and grab a rod on the way, with a couple of hours till dusk there was more than enough time to look for a cheeky opportunity to bend Carpathia again.

I did my rounds at Tithe and once happy began looking for fish. There were one or two at the top end of the top pond among the weed, but after catapulting out some bread and being destroyed by a flock of gulls, I decided not to pursue them. As I waited for duck Jock arrived and said he’d hang on till dusk, so I left Tithe and wandered over to Carron Row.

This weekend I planned a visit to Vale Farm, the perfect venue to see exactly what Carpathia has to offer. I asked Johnny if he’d like to come along, very handy with a camera is Johnny, and what’s more, he offered not to fish, but to hone his camera skills and pictorially document the day from start to finish. So, with this in mind, I’ll let the photos do most of the talking. I picked Johnny up at 7am and after a quick stop for supplies we hit the road and arrived at the venue an hour later. He particularly enjoyed the final mile or so, weaving through narrow country lanes, which of course are compulsory when nearing fishing lakes. Carpathia has arrived, and as promised I’ll attempt to put down a few words with reference to my first thoughts, but you’ll have to bear with me, words aren’t coming very easily right now, there just aren’t enough superlatives to describe what I’ve just unwrapped. The colour struck me first, the most perfect dark cane, without being too dark, like sun tanned honey. Then, as I slide more from the beautifully crafted bag, I marvelled at just how slender the rod is, slim yet sturdy. I admired the whippings, the glass like finish, and realised that everything said about this super talented rob builder is true.

Email ThisBlogThis!Share to TwitterShare to FacebookShare to Pinterest
Labels: Carpathia

Having started work at 3am and finished at 10:30, most sensible people would have gone home to catch up on some sleep, but no, not I, I had to grab the essentials for an afternoon’s stalking, besides, the sun was shining, and on my local pools I knew just where the carp would be. Plus, the added bonus that most folk would be at work.


I got to Tithe Barn and began trotting around the perimeter of each pool, there were anglers present, but only a couple on the top pools, and nobody on the bottom. The middle looked very quiet, the water was coloured, not much weed was present and without the snags which were recently removed, it was tricky to locate the fish. They’d obviously be amongst the pads, but they were in their prime, and there was no way I’d be trying to extract a carp from them bad boys. They’d also be on the bottom, but fishing blind on these trips isn’t my game. 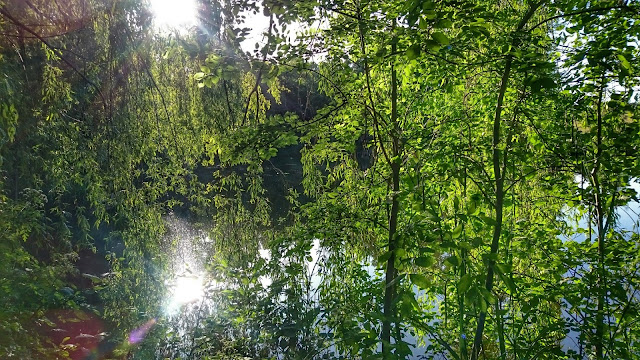 The top pool, however, showed signs, the same signs I saw a few weeks back, great carp, twenties swimming around in and out of the weed, pausing to nudge the fronds of willow, following each other out into the centre channel and then to repeat the process. They were playing, busy frolicking and certainly not feeding, at least not strongly. I did think though that they might just snatch at a single piece of crust, so toured the lake looking for fish, watching their directions and trying to cast baits a few metres beyond their path.


I gave this a good hour, and in between visited the middle pool also in the hope of seeing something; it only takes that one opportunity to show itself to make a blank day a memorable one. By 2pm I sat with my back against a large oak, ate my sausage bap and drunk some water. It was warm and although I saw plenty of fish, they just wouldn’t play ball. I could have actually fallen asleep against that tree, but I had a job to do, so soon enough I was up and back on my travels. The bottom pool was worth a look.


I was glad to did; the surface was electric, lots of fish moving, and mostly carp. Upon closer inspection is was clear that most of these were small commons in the 2 – 4lb bracket, but I felt sure that with a little searching I could find something a little more worthwhile. Having said that, a fish under my belt would have been a good start, so I selected one of the better commons, gently made a cast and tricked the little blighter into taking it. Minutes later I had a perfect little carp on the matt posing for a photo. It felt good. 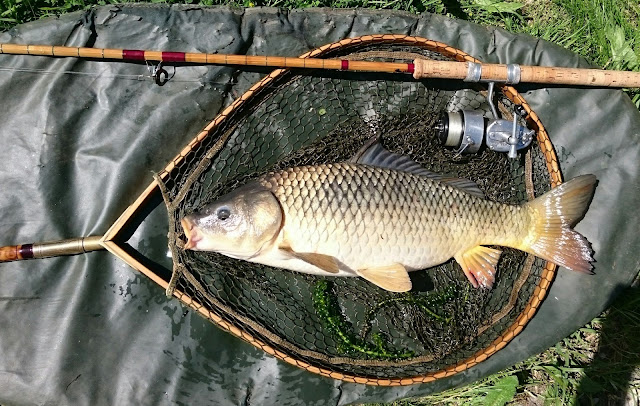 With the little fish released I continued my stroll of the bottom pond, without tackle, just a look. At the far end I stumbled upon a slightly better common, but then caught sight of something larger and darker. It looked as though it could be a mirror, nestled head first into some weed, but the final two thirds of the fish looked very nice. I fetched my gear and made a cast gently just beyond the fish, drew it back carefully and allowed it to settle among some weed a few inches away.


The fish must have smelt it straight away, its tail flicked and as it swam out from the weed backwards it came parallel with the crust. Another fish, a smaller common, came over to inspect too, which could well have spelt danger, but the mirror clocked his advisory and quickly sucked in the crust before the other one had a chance I struck and the fun and games began.


The weed here is much less dense these days but still dense enough for a fish to get wedged in. But, by keeping the carp moving I managed to avoid said disaster and safely netted a gorgeous looking fish. It was a fish I’d caught before, but when they look this good, and things are a little tough, they really can brighten your day. I took a quick self-shot and was back off to the top pools, brimming with confidence. 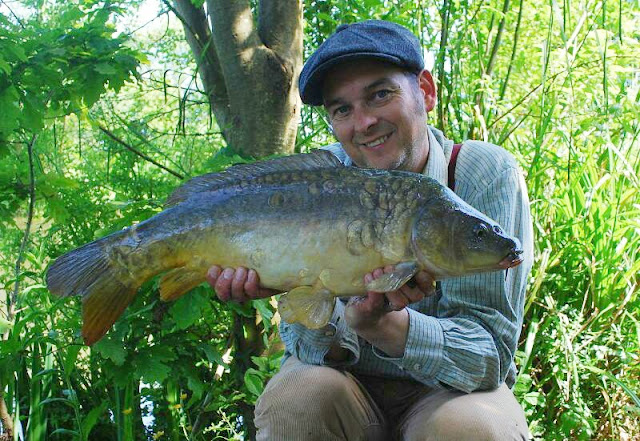 Things were pretty much the same as before on the top and middle pools, carp were there, but either inaccessible or just not up for it. I had fun for half an hour watching a shoal of bream try to eat a large lump of crust, but that soon got old. Finally I decided to call it a day of Tithe Barn, but that doesn’t mean going home, it was only 6pm, more than enough day left to tempt one from Carron Row. Just down the road Carron Row was another venue with multiple lakes to wander, and with more familiar spots to search out.


I arrived to find only 2 other cars in the car park, always a bonus. I had a quick look at the first two pools, but it was the third I was really interested in, that’s where the real gems live. I figured that with the hot weather they’d be up at the shallow end, which means a stealthy approach, the amount of times I’ve crept up quietly only to find massive bow waves leaving just as I arrive. This time was no different, I couldn’t have been any softer, but still they knew I was there. 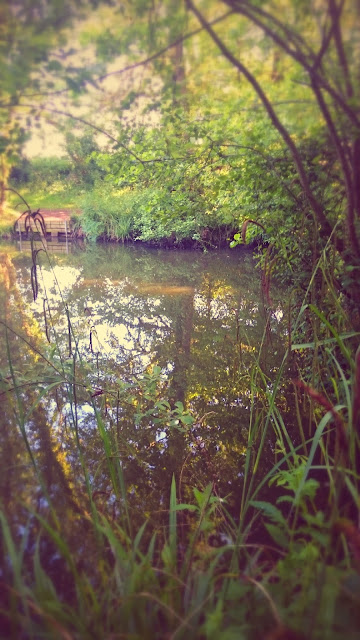 I sat beside the lake, still as stone and ready to be called into action at the drop of a hat. The fish came back after half an hour, but upon close inspection I realised it was two small common so I upped sticks and went in search their friends. A good stroll looking into all the likely spots releaved nothing, I’ve seen it before where they just melt away and become invisible, but I guess it keep things interesting. If they were easy to locate every time I suppose it would get boring and no longer a challenge.


I ended on lake two, mostly containing small commons but I was sure there was likely to be a surprise or two still lurking. I fished the disabled swim; the right hand margin is very overgrown, and culminates in a submerged tree that usually holds a few small commons. I made a cast with double mixer and immediately small fish came up to investigate. The issue was that most of the fish were too small to take in the double hook-bait, and it being thrown about all over the place I watched the line instead of the bait.


Sure enough, the line tightened and started to take off across the surface, I struck and wound down, but I just wasn’t quite quick enough, the fish made the sanctuary of the underwater branches and broke me. It’s always a sad affair to leave a hook in a fish, but they were barbless, and sometimes it’s just unavoidable. From then I fished slightly closer to my own position, and tightened the clutch a touch more. It didn’t matter though; two mallards came in and ruined the spot shortly after.


I was stood there, line out of the water swinging in the breeze with just one mixer left on the hook when I spotted a common cruise through just under the surface a rod length out. I crouched down, gently laid the bit on the surface and watched as it rose higher, broke the surface with its quite large shoulders and made no hesitation in sucking in the mixer. I struck and half expected to bundle the fish in the net quite quickly, oh how wrong I was. The water erupted, the tail slapped the surface and I had made a fairly substantial carp very angry indeed.


It ploughed around for what seemed an age, this way and that, out then back in, it was immensely powerful, and the few occasions I did see it I understood exactly why, it wasn’t the longest fish, but it was very deep, chunky and had an abundance of brute strength. It governed the fight from the off, the Elite gave line in a stuttering fashion, not the smoothest of clutches so I used the backwind as well, just as some added security, I didn’t want this one to get away.


It seemed like forever, a friend across the pond came round to see what was happening, my arm was aching and this carp just would not give up. Finally and with both of us beaten I slid the net under a glorious fish, a real bruiser and an excellent way to end the afternoon session. My friend snapped away while I held aloft my prize. Possibly one of the heaviest fish left in pool two, and certainly one to remember. I gave the fish a little peck on the head before returning it to the depths. Session over and mission accomplished. 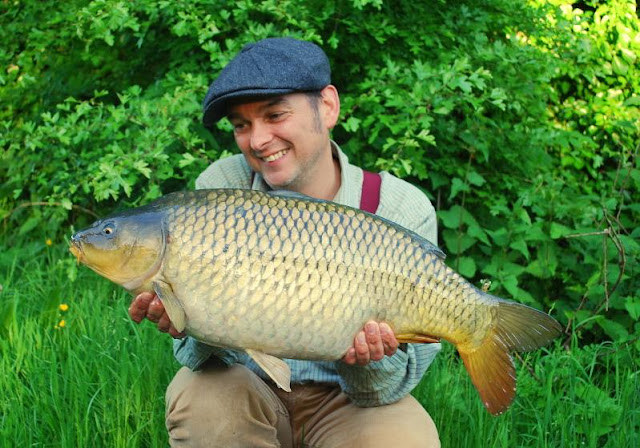