Going into the weekend I had a vision of spending a weekend with a group of anglers I didn’t know, save for a couple, and on a venue I had little or no experience on, fishing an approach alien to me and with the prospect of rain. As it turned out I was completely wrong, I’ll explain.

I’d arranged a lift with Jace, we’d never met but after a brief phone conversation I was happy that we were on the same wavelength and that we’d get on brilliantly. Andy contacted me after getting wind that I’d be attending and asked if I wanted to partner him, I agreed knowing that Andy was a good angler and another of the very few I had actually met before. So the plan was to work until Thursday lunchtime, leave at 1pm and head for the linear complex in Oxfordshire, the venue was Brasenose two, runs water known for its big hits of fish, but whether or not it would happen with the lake pressured remained to be seen. The danger was also being tied to one peg, if it was a bad draw then you could sit in an area devoid of fish watching others catch, but it was a gamble that had to be made, I was just happy to be going fishing for the weekend.
Click here for the full post...
Posted by The Sweetcorn Kid at 08:59 No comments: Links to this post

Yesterday I took my Mum out for lunch and cinema. A day early I know but I gathered that Sunday would be very busy what with everyone taking their parents out for the day. This came with the added bonus that could get in an overnighter and see if I could cause that big ghostie to slip up……
I got there around 4:40pm, it had been drizzling all day but a break in the weather meant I could get the brolly up and the rods out without getting drenched before I’d even started. The rain held off long enough for the first fish to be landed. A slow lift on the bobbin just before dusk set in and a scrappy and very plump common was brought to the net. 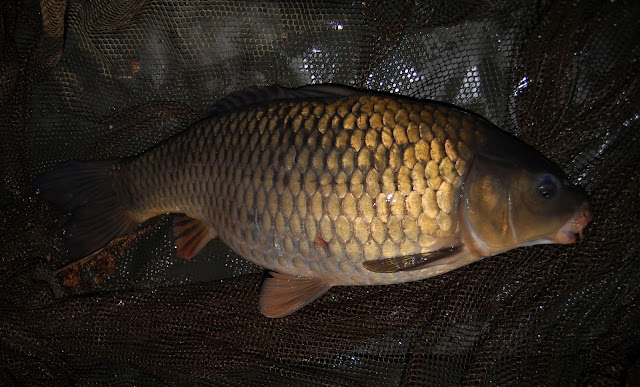 I only fished one rod, the spot is small and another would just get in the way as the plan once a take has been struck is to run right and stop any fish gaining sanctuary among the snags. The rod was situated so I’d just have to reach out and grab it should a take occur through the night, with the spool semi locked-up I could steer the fish away whilst slipping on my footwear and throwing off the sleeping bag, a plan that had done me proud so far.

Seeing as I already had the gear in the car, it was a nice day and the big ghostie was on my mind, I asked the wife if she wouldn’t mind me having a few hours down the pond this evening, lucky for me she agreed. I popped out to Asda at lunchtime and purchased a loaf of bread and a tin of spam. Four pm came and I was already on my way, naughty I know but I felt the need to slip out ten minutes early. The big ghostie was due out, and I was hoping I could tempt her!

Yesterday it was time once again to board the Isaak with Cap’n Crimp. I met Rich at Hampton and reviewed the prospects for the day, with the first half concentrating on catching bait and the second half trying to tempt those toothy critters to the boat.

The morning was great fun with Rich and I doing great impressions of Huck Fin catching minnows, roach, bleak, perch, chublets and dace. I must say I was rather disappointed when we had to pack up and head for the river.

Today I visited Waggoners again, after the success of last week’s trip I could think of nothing else all week, well apart from my wife’s 13 week scan, so Friday was booked off work and the relevant plans were made. With the sun appearing over the trees late in the day the previous weekend, I didn’t plan to get there until after ten, this would also let the traffic die down a bit.

I got there, after being stuck in traffic due to an accident on the motorway, at around 10:15am and headed straight for the spot I caught from the almost a week prior. The mist was heavy and blocked out the sunlight but at half ten the sun shone through enough to make things feel quite warm, and with that, the fish started to show, not in numbers, but the odd one was visible. I watched a fish cruise in from the left which headed straight for the margin I was fishing, it hovered over the spot and dipped out of sight, my gaze transferred to the rod tip and the slack line hanging from it. In a flash it tightened and the tip arched round, I clambered down the bank, struck, missed and saw the fish swimming away. I cursed my bad luck that I’d missed an opportunity but was thankful that I’d attracted a fish early on. Looking at the rig I decided that it was probably down to the 1 ounce lead I was using and upped it immediately to a 2oz.