There is an air of childlike innocence surrounding the use of old tackle for fishing. It’s hard to explain what I mean but I will try anyway. Recently I have taken to using traditional tackle, and by that I mean a split cane rod, old Mitchell reel and very basic end tackle. I would like to take this further by obtaining a vintage (but safe) net and a creel to sit on and stow tackle sometime in the near future. There is a largish pond of around 15 acres very close to my home that contains carp, not massive carp, the average is probably no more than 6 or 8lbs but bigger ones do exist there with reports of fish breaking the twenty pound barrier. But, being so close to home (3 minutes drive) and having mainly small carp in, I find it ideal to try out my new found passion.

A year ago I would have thought you mad if you told me I’d be more than happy catching single figure carp on a wooden rod but it’s true, it pleases me no end. The childlike innocence I mentioned comes from watching the bright float riding the ripples and holding onto a cane rod which I must say is much heavier than my carbon ones and using a reel that is very noisy and the clutch is terrible, but although I didn’t use such items of tackle in my youth I ca imagine that many did long before I was around. The water I have chosen also suits me due to the fact that there is little or no chance of bumping into anyone I know, it isn’t fished very much and there is always a nice spot to hide away, eliminating the possibility if someone recognising me and laughing at my equipment. The carp, although very small compared to the carp I usually fish for, fight like tigers, testing the vintage tackle to the limit, but if the old boys did it, I’m damn sure I’ll have a good go. Using such gear also allows me to tune into my surrounding better which I’m sure helps me blend in and go unnoticed, I like to think of it that way anyway, and why not.


I may wax lyrical here and there about the old days and pools, the tackle they used and stories they told, but that’s the side of the sport I love, don’t get me wrong, I love catching whackers as much as the next guy and will always enjoy a good social sat behind buzzers for a couple of days, but when it’s total enjoyment I’m after its solitude and old tackle all the way. So much so that I have decided to start making my own items of tackle, starting with floats. The lake I speak of has a healthy flock of canada geese which have recently moulted fairly heavily, not one to shy away from an opportunity I visited after work for a few evenings and gathered around 40 decent quills ready for preparing my own wagglers. Work has commenced and I’m very pleased how they are looking considering this is my first attempt. So, this evening I returned home from work, whipped the float and applied the first coat of varnish, this was then hung up in the shed to dry and I grabbed my bag, rod and net and headed for the lake. The weather wasn’t particularly nice with rain, sometimes driving at an acute angle making everything fairly unpleasant. I wasn’t surprised to find no other cars in the car park and quickly trotted round to my favourite swim. It’s more of an opening than a swim, the metre wide space consisting of trodden down foliage with tall trees all around acting as a natural shelter, although I still took the brolly along.

I set up first with the cane and the centrepin. Tackle was a lump of plasticine as a sinker and a size ten hook with two grains of sweetcorn as bait. This was gently flicked a rod length from the bank followed by a handful of the sweet smelling grains as an attractor. It didn’t take long until the line was twitching and I made three or four strikes until I connected with the first fish. It was a scrappy affair with lots of head shaking which ended with a lovely little common carp lying in the bottom of my net. The wonderful little scamp was returned and out went the tackle followed once again by another handful of sweetcorn. A few minutes later after watching a dabchick the rod tip pulled round again, only this time I couldn’t stop the first run, the old centrepin screeched a horrible yet heavenly sound as the fish charged off towards the reed bed on the far bank. I checked it’s run a good few metres before it reached its sanctuary but as it quickly turned for another dash I applied the pressure again and the line parted. In came the limp line and on inspection I found that the line was of around 8lbs bs, plenty strong enough in most cases but with the speed of these dashes and the danger of nearby snags and reeds I’d have to step it up. With this in mind I switched to the Mitchell which was loaded with 10lbs line, not a great deal heavier but enough, and I felt I’d be able to control the fish better with the fixed spool.

I continued to fish with one eye on the rod tip and the other watching dabchicks, geese and tufties. It seemed like a good while after countless small twitches that the rod registered a decent bite again, and after watching the line slice through the water and the rod arch over I struck and was into another hard fighting lakeside carp. A huge bow wave took off towards the reeds (it’s uncanny how they all know exactly which way I don’t want them to go) and as I applied side strain with the old cane rod making some very odd noises the fish kited right and away from danger. The extra power I had from the line and the reel made all the difference and within a couple of minutes I had another wonderfully proportioned carp lying on the unhooking matt waiting for the photo shoot. A quick snap and the fish was returned. Just then I decided it was time to return home and get another coat of varnish on my float. 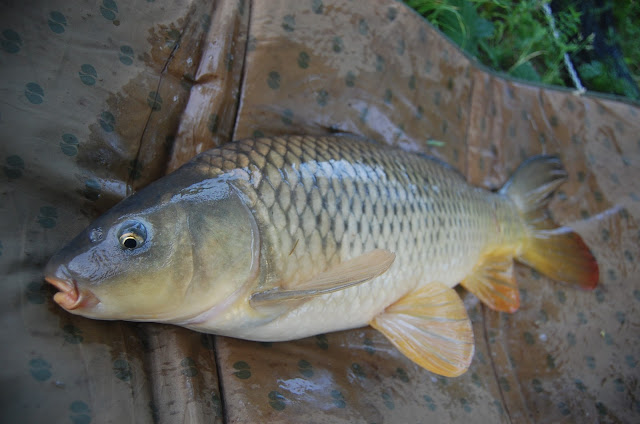 Since this article the float making has come on very well, here is a picture of some floats I have produced. This particular set was for Martin James.....