I arrived a little earlier than usual, I could have stayed home and left to get there for the swim draw, but I decided I'd just as well be at the lake getting a feel for it, searching out likely spots and getting the order of swims straight in my head. As always it was likely that I'd completely change my mind at the draw, but it felt better having at least half a game plan. The end swim looked the best bet with the wind pushing down and fish present on each of the previous work parties, but with ten anglers drawing for swims I had to have a back-up plan, just in case. It was windy when I arrived, blowing from the dam down to the shallows. The dam had a good section of flat water in front of it but twenty or so yards out the surface began to ripple. I walked along the car park bank stopping at each swim for a look, but instead of searching for fish I found myself more interested in foraging for materials to make traditional catapults and rod rests. Once I'd collected enough to make two rests and three catapults I concentrated on the water, although it was very rippled and fish spotting was nigh on impossible.


The time came to draw from swims and first out didn’t choose the end swim surprisingly. Second did though so as I was third I managed to secure my second choice, the centre swim. The swim commanded a lot of water and had some peachy looking margins, but there was a lot of weed present so, once in the swim, the first job was to find somewhere to cast. I cast the lead around for close to an hour, and eventually found a couple of spots where the lead didn’t plug into weed or silt. I deposited some free bait onto these spots and settled back to await cast time. England were playing their game against Sweden but I’d left my radio home so relied upon text updates from friends. It happened that I had three different people keeping me updated so the phone was very busy in the second half where most of the action seemed to take place. We won the game so a little jig was performed, a tea was brewed and the first casts of the new season followed shortly after. I was nice to be angling again on the pool I’d missed for a few months, but there was something niggling me that I couldn’t put my finger on, although it was to be blatantly obvious later in the session.
I soon drifted off and woke to a blazing sun blinding me momentarily. News came through that my friend in the end swim had caught, and four fish to thirty pounds was a terrific result from this water, if only I’d drawn better! I sat for a while watching the rods, happy to be in such beautiful surroundings, with superb carp to angle for and in such lovely conditions: but I still had my doubts and didn’t feel completely relaxed. I was as if I was shackled to the spot, waiting for something to come, and not feeling very confident that it actually would. Thoughts of other waters and, most importantly, stalking came to mind. I spied a rhododendron to my right, a known holding spot especially in the mornings. I wound the right hand rod in and made the underarm flick in the direction of the shallow, but productive spot only to end up looping the line over a low laying tree branch. I tried to ease the line off the snag but just made the tangle even worse until I eventually had to pull for a break. That well and truly made my mind up for me, straight away I found myself winding the other rod in, packing the bivvy down and loading the barrow. Back in the car park it was a little after 9am, plenty of time to find another water and stalk a June 16th carp.
Carron Row seemed the obvious starting point due to it being less than a mile away. I pulled into the car park to find quite a few cars present, but there was still room for me to squeeze in, and with just the essentials in tow I could freely roam all four ponds and settle wherever I pleased. I felt release stalking around with net and rod in one hand and loaded mat in the other, the barbel rod and Leeds centrepin were not the traditional tackle I really wanted to angle with, that kit was left at home, but it felt much better than being sat behind alarms just waiting. The first spot I wanted to try was another rhododendron bush; this was on pond two and hung high out over the water creating a cavern underneath where the carp liked to hide.  I tackled up with a small four inch float, two number four shot and a size four hook with a chunk of luncheon meat as bait, my favourite. The float twitched a little at first due to the small silvers attacking the hook-bait, but it soon settled on the bottom and I perched on my bucket and watching for it to slide away. Half an hour passed and I wasn’t actually concentrating when it did happen. A guy fishing opposite caught a tench and proceeded to cheer as it was the only fish they’d seen caught all day. I looked back in the direction of my float but it wasn’t there. I struck, more to see what was going on than to connect with a fish, but connect I did. A strong fish charged out into open water with the centrepin spinning and the rod hooped over. into it's battle curve
Boy, it felt good!' 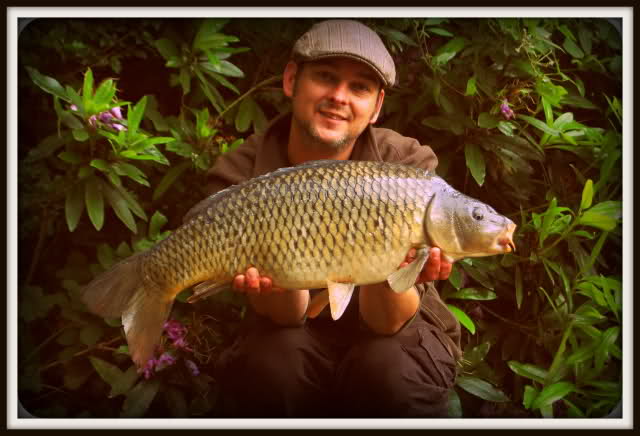 During the fight, which lasted a surprising time considering it wasn’t a monstrous fish, I imagined what it would feel like if I was using my new rod and reel. Something I’d have to wait to find out but something I looked forward to very much. Every time I got the fish close to the net it charged off again, for what looked like a mid-double common, it was very powerful indeed. After a good few minutes the fish was wallowing upon the surface and the net was successfully slipped underneath. I left the fish in the edge whilst readying the mat and camera and one of my neighbours offered to take a few shots for me. The pics were done, fish returned and that June 16th fish put a great big smile on my face.
I cast back out and sat, still smiling, for another hour, but nothing else occurred. I moved around the four ponds looking for signs and eventually found one on pond three. Previously there were four bivvies camped around the pond so I decided it was a waste of time, but I overheard someone saying that the pond was now devoid of anglers which made me quickly slip the hook into the keeper ring and trot off for a look. I walked around a few times and saw nothing at first, then noticed in one remote corner that there were two fish milling around just off the edge of the point swim, very close to the bank. I crouched down to watch and spotted a good common with a very dark chainmail back cruise through right under my nose. Once the fish moved off I set the depth on my float, gently lowered the rig into position and crawled back out of sight with just an inch of the rod tip poking over the front of the swim. An hour I sat for waiting for those fish to return as I felt sure if they did I’d land another, but alas they never came back and I was soon on my travels once more.
I settled briefly into the causeway swim on pond two where I could spend the last hour watching a float ride the ripple just out from the reeds. I felt sure that a tench would be first to inspect the bait and I was right. Ten minutes passed and the float slid away, I played a small, slippery tench of a pound and a half to the margin, slipped the hook out whilst the fish was still in the water and broke the rod down. I felt contented, warm inside and happy that I’d decided to pull off the original water when I did. The transformation to fishing more traditionally had taken a serious turn for the good. That’s not to say I won’t be back, I certainly will, but it will be to fish when the place is much quieter. Perhaps midweek evenings where I can roam, stalk and maybe even catch one from the surface…..now there’s a challenge.
Posted by The Sweetcorn Kid at 09:15