A weekend of ups and downs... On Friday I’d planned to fish for a few hours and after finding that my chosen venue was too busy I opted for Carron Row Farm. I managed one tench but lost a very special fish. I had been told that pond three held a linear but hadn’t seen it or even a picture, but a few anglers assured me that such a fish existed. Well on Friday afternoon I was float fishing alongside an island when I noticed the float slide away, I struck and was connected to a carp that hadn’t quite realised it was hooked. As it rolled just out from netting distance I spotted that tell tale row of linear scales along it’s flank, I couldn’t believe it, after all this time, maybe five seasons, I’d finally found her and she was drawing closer to the net. She looked a decent size, not massive but I’d estimate around 18lbs, but she’d started to wake up a bit and started trying to bore deep into the pads. I got really close with the net a few times but one time just as I was reaching out the rod tip sprang back and the hook had slipped. That loss really hurt, but I vowed to make amends the following day.

The following morning I was due at the water I bailiff to help out with the work party, clearing paths, laying chippings and generally getting the place looking nice for opening day. I still had the stalking gear in the car from the previous day and also a few mixers and half a tin loaf. I mentioned to John that I was going to try my luck at the Barns on the way back and he agreed to come along and see if he could get a few snaps if I was lucky enough to capture something. We got to the top pond and straight away we noticed a few fish milling around in the weed. The weed was quite dense but looked to be that candy floss type stuff which, if you can keep the fish moving, is easy enough to land fish through. With my barbel and light reel with 8lbs line I flicked out a free-lined piece of crust which landed gently. For a split second I wasn’t watching as there were quite a few fish around the area, but I felt a pluck on the rod, looked up and saw the fish spitting the bait out. John and I chuckled and I made the recast. Just a few minutes later and with fish back I watched on as the crust disappeared again, only this time the strike connected and the battle commenced. The fish tried to tear through the weed but with steady pressure and by keeping the fish moving I soon had the fish wallowing around in the clear patch in front of me and out of danger. I netted the first fish of the afternoon and John snapped away the whole way through. The fish, a common, weighed 16lb 8oz. John was as pleased as I was, a fish very early on and after a missed chance. It kind of went some way to make up for the terrible loss the previous day. Soon after the fish was released we sat and watched the water but the other carp seemed to have moved out of the area and further towards the others fishing the lake. With this we made our way to the middle pond for a look, and found some fish among the pads straight away. I made a cast but soon after a Canada goose came through and it was evident that he wasn’t going to leave me alone. I looked around the pond but there were others fishing in the areas I fancied so John and I made our way back to the previous spot. As we got there we could see fish cruising back through the channels in the weed. The beauty of this spot was that the fish were only around 25 yards out meaning that my favourite method of free-lining could be employed. With another crust attached to the hook I watched two fish move out of a channel and cast into it. It almost seemed as if one of the retreating fish turned for a look, approached the bread and sucked it in, I made no mistake with the strike and was soon steering another carp through the weed and into the awaiting net. This fish was a tad smaller at 12lb 8oz but was really classically shaped. John and I were full of smiles, and rightly so, this was just a quick look on the way back from a work party to see if there was any chance of capturing something. In the four previous times I’d fished the venue, including two overnighters, I’d only ever caught one small common. Again the fish moved off momentarily but they only moved off the back of the weed, a chuck of around 40 yards. It was then I decided to try a controller float. A friend of mine, DrBleep of Carpsmart products, makes wonderful controller floats that are made of wood with a swivel attached and varnished to finish them off. There are two types, the sit up type and the lay flat type. On this occasion I opted for the sit up one and attached it to the mainline between two Drennan float stops. I made the first cast with one of these floats and the first thing I noticed was that it did wobble a tad in flight, but with feathering it down it landed without a major splash at around 45 yards, just where I needed it. 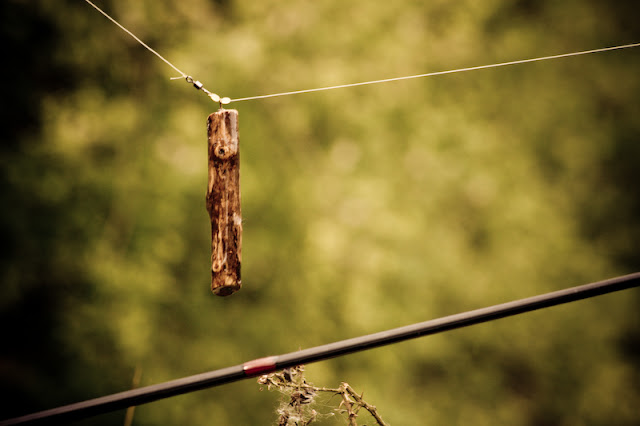 Much the same as earlier in the trip my concentration was stolen for a few seconds and I glanced back to see a swirl under the crust, I struck and missed. So two missed takes and two fish on the bank, I make that level pegging. The next couple of casts went where I wanted them but the fish seemed on edge and started looking a bit difficult to outwit. One particular fish cruised into a channel to my right and I thought of going back to free-lining, but instead I cast to the extreme far edge on the same channel in the hope that it swam that way. It did, all the way almost in slow motion, and as it got under the crust it hesitated a bit and then up went the boil and away went the controller. 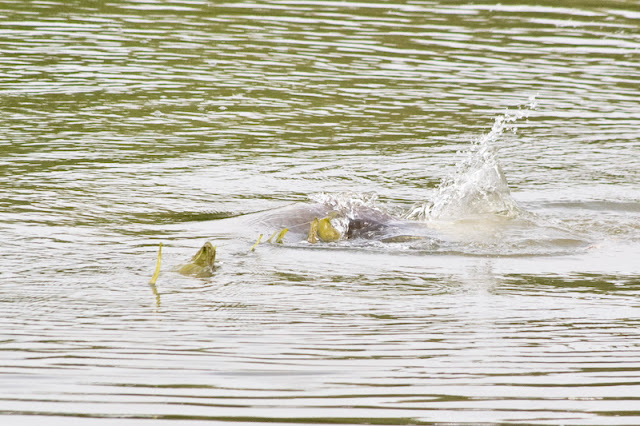 It was apparent from the off that it was a much stronger fish, it managed to get a little deeper into the weed but I held my ground and did my best to keep the fish moving. It was such a relief when after a good few minutes the fish broke clear of the main weed beds and started ploughing round and round n the relatively clear water just out in front of me. It was still an eternity for the fish to finally go into the net, and every powerful lunge of its massive tail made my heart skip a beat. But once she was in the net and I lifted, I could tell it was a decent twenty. She weighed 25lb 2oz and it was smiles all round, hand-shakes and lots of photos. 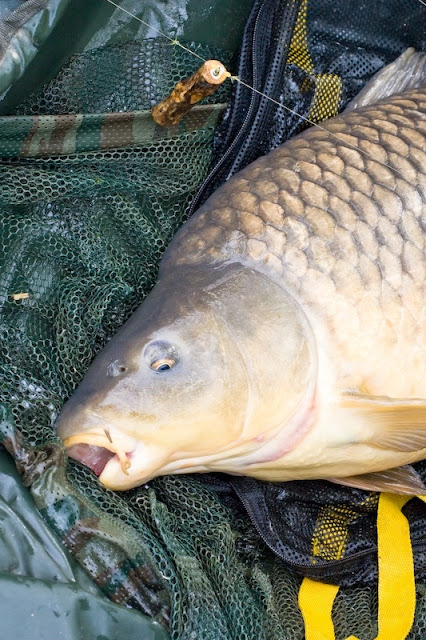 A brief visit back to the middle pond followed but the goose was still looking very mischievous, so John and I decided to give it half an hour more on the top pond, but from a slightly different angle from a different swim. The cast from this swim was alongside the edge of the weed I was fishing to before, and there were one or two fish looking up for it after I cast, so much so that I managed to pull the bait from yet another fish’s mouth. After that missed opportunity they drifted off and started rolling here and there but not cruising, it was getting cooler and I felt that they were probably more likely to feed on the bottom than the surface. John I decided to call it a day, I thanked him for his company and for snapping away like mad with the camera at every opportunity. Three nice fish landed, and three missed takes, I make that a draw and don’t really think I can complain too much. It was warm, the fish were up for it and I had excellent company with me....what an afternoons fishing! 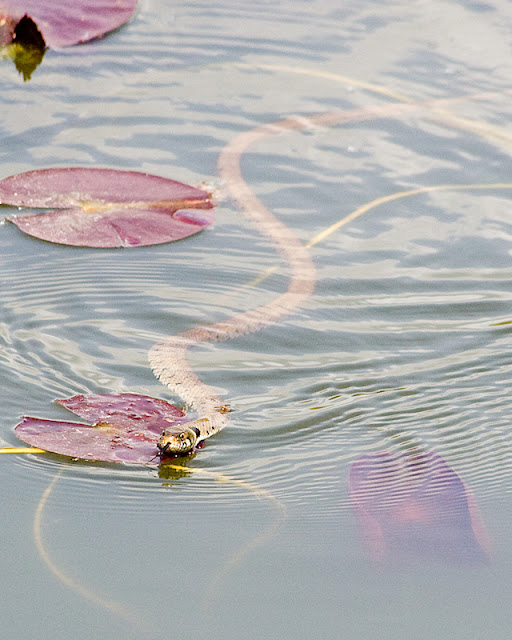