In Search of Roach


A quick peek outside revealed that, as expected, the Porsche was covered in a layer of thick frost. I estimated that it would probably take around twenty minutes to half an hour to scrape it all off, I didn’t envy the neighbours one bit. My old banger however, was ice free due to it being parked close to the house. As soon as the gear was loaded into the back I set off to the roach pool in hope of that elusive two pounder and to continue where last winter’s campaign ended.

It isn’t actually a roach pool, that’s just what I call it. For the majority of the year it is a busy day ticket carp fishery, but it holds a few really good roach, many going over the magical two pounds. My best to date was one pound thirteen ounces, a splendid fish however you look at it, but there was something special but that extra three ounces. As the first of the frosts had come and gone and with more arctic weather due it was time to continue the search, and to try and enjoy myself along the way.

I got there, after a visit to the bait shop, at around 9am. Not a particularly early start but I saw little point getting there at the crack of dawn; it would have been even colder and probably dark.Besides, I needed cockles and the fishmonger didn't open until 8am. As it was there was only one other angler on the pool, a carp fisherman setting up his camp and whilst I unloaded my car one more turned up. As I approached the pool I was met with a completely different landscape to the one I’d been used to. Autumn was gone and winter had well and truly taken hold. The ground was tricky to manoeuvre especially in my lined boots, the frosty grass was covered with deep footprints in the mud which had filled with rain and were now frozen over, so walking to assess the swims was both slippery and crackly. I opted for peg 9, this swim was in the entrance to a bay and had an overhanging tree to the left of it. I don’t know what it is about overhanging trees but I think all swims should have one. With my brolly and chair in position I returned to the car to fetch the rest of my things, just as the sun began to climb above the trees. I settled into the swim, made up two rods and tackled them both up with floats. Size 14 hooks were baited with cockle meat and with both floats sitting around a metre apart two rod lengths out, one off the bottom and one on it, I fed a few maggots, a couple of small balls of ground bait and sat back to watch the world materialise out of the fog. I sat there for a couple of hours topping up the swim with bait and topping up my cup from the flask. I never saw either of the floats move, but that was probably something to do with the fact that I was busy watching everything else around me. Kingfishers began darting around, trees appeared as the sun burnt the fog away and a carp, followed by a roach, rolled in the margin opposite me. This prompted me to up sticks and move to where I saw the action in the hope of an opportunist result. I re-pitched as quietly as possible, plumbed the depth, deposited a little loose bait in the area and proceeded to fish. The morning turned into afternoon but still I had no dips to either of my floats. By 2pm I was beginning to wonder if this could be a blank trip. It mattered not really as I had some wonderful pictures on my camera along with everlasting memories in my mind of what was one of the most perfect winter’s mornings I’d witnessed. But all along there was something missing, a wonderful polished silver roach with blood red fins. With little more than an hour left I decided to move once again, closer to the car and to the swim past the bridge where I’d had roach before. Again I settled into the swim, plumbed the depth, introduced some bait and resumed fishing. The wind had sprung up by now, a biting wind that took my slack line into an arch making the float sit in the water awkwardly. Then the bites came, gentle dips on the tip reminiscent of crucians. I couldn't hit any, missing them as they were far too quick. I wound one rod in and leant it against the reeds, cast out the one remaining rod and held it to see if I could hit the bites a bit faster.

Gentle dips and bobs occurred, lifts too and it took a while for the float to actually disappear. When it did I struck and connected with something, it wasn't powerful enough to be a carp but it was too strong for one of the smaller roach so there was only one thing it could be. A few good lunges on the rod tip practically confirmed that a good roach was hooked, but soon after the hook slipped and I wound in an empty hook. I cursed my bad luck, attached a new cockle and cast back into the swim.

A few missed bites later and with the sun beginning to dip back behind the trees I connected with another roach. Only this time it stayed on and I slipped the net under the most beautiful fish I’ve caught in a long time. A quick hoist onto the scales revealed it was one pound and ten ounces. I took a few pictures on the mat and retuned it into the next swim down. That fish made a fabulous day out even better, although I do seem to be making a habit of leaving things until the last minute 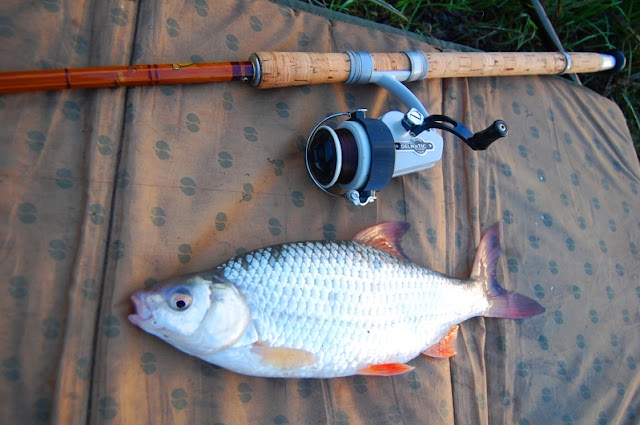 I felt there was a chance for another fish, not to sound greedy, but there was still enough time (around twenty minutes or so) to continue fishing. And continue I did, but all the time the sky above me darkened, not only from the retreating sun but large multi coloured rain clouds rolled in, the wind strengthened further still and things were looking a little hairy. With the first of the drizzle I started to break the rods down and dismantle camp. Before I managed to get back to the car the heavens opened and everything got wet, but I still managed to get a quick snap of the sky before loading my wet things into the car and heading home. I was surprised how quickly it got dark, dusk fell almost instantly, it was quite eerie.