A look behind "The Green Gate"

This weekend I was very privileged to be able to spend time behind the famous, but little talked about, Green Gate. A veritable maze of pits, small, large, some very famous but all unique and all make up what is one of the most exciting fisheries I’ve ever been lucky enough to visit. There is something for everyone and the thing I liked the most was the camaraderie, passion and general way of life that these carpers show and enjoy. I’ve visited Yateley in the past and seen similar, another unique group of anglers who have a strong passion for a collection of waters local to them, although Yateley involved a lot more tea drinking. I almost felt a bit like Ross Kemp, the series where he visited various gangs around the country, these angling groups also have their own traits, their own uniqueness and that, I think, is very important. I just find myself lucky enough to have been able to taste the delights and meet the wonderful people, even fish a couple of those fabulous waters and catch my first Colne Valley carp.


It all started with Baity from the Carpy forum inviting me down to the valley for a guest session. I jumped at the chance and, little by little, word spread of my guest invitation and it gradually turned into a forum social. Not only would I be meeting for the first time people I’d only chatted to from behind a computer screen, I’d get to fish two of the glorious CV pits and spend time with passionate anglers who welcomed me into their realm. I met Baity on Friday afternoon who took me to the local Harefield Angling to purchase a ticket and stock up on a few bits I needed. I’m always amazed how little I leave tackle shops with but how much my bank balance gets dented. The shop used to be tiny but has expanded into a very impressive emporium of everything the angler could need. After a quick stop at the shop for milk we made our way to Pit 1 and the first leg of my CV journey.

Baity had been fishing the night previous and, along with some hefty bream, landed a nice 22lb common. Pit 1 was right up my street, probably the smallest on the complex being around 7 acres. It was very pretty, a series of bays, islands, pads and reed lined margins. The stalkers paradise and home to some lovely carp some going over 30lbs it is said to be the easiest pit available but a great opportunity for me to get off the mark. He’d been feeding a little bay to the left of the point swim and had carp taking readily, but resisted the temptation to cast at them leaving it for my arrival, and hopefully my first CV carp. I arrived at the point at about 1:30pm, the front of the swim was where I’d be casting the bottom rods but the left hand bay was where the stalking was to take place. Without wasting a minute I quickly set up a 10ft glass rod, Mitchel 300 and attached a size 10 hook, this was loaded with a couple of mixers and we fed the area in the hope of getting the carp feeding confidently.
The time came to cast, carp were feeding well and, although it was jungle warfare, it wasn’t extreme so I was confident of landing what I hooked. A few casts were made and the fish that looked certain to slip up had other plans. But with the two of us watching, feeding and choosing our moment a carp was hooked after hanging the hook-link over a wispy branch leaving no line on the water. It charged off and tried its best to make the sanctuary of the deepest snags but I kept on the pressure and soon enough Baity was netting my first Colne Valley carp. We were so pleased, it wasn’t even an hour into the session, the barrow wasn’t even unloaded and I had my first one. We weighed it at 14lb 15oz, a lovely turbocharged common built for speed, and the photos were taken.
The spot went quiet after that, and understandably. It was time to set up the brolly for the night, put the kettle on and rig up the rod for the night. With one rod out Jimmy and Kempy came round to our swim from the other side, they were visiting the famous Dolphin fish and chip shop and wondered if we wanted anything. Whilst they were in the swim chatting the carp began feeding once again in the left hand bay and after a few awkward casts I managed to hook and land another lovely common of bang on 17lbs. Jimmy and Kempy left soon after to get dinner and I set up the second night rod and cast it just off an island.
Dinner was consumed and the hype was spot on, up there with the best cod and chips I’ve tasted. Whilst Baity and I chatted about carpy things, tied rigs and put the world to rights, bream entered my swim and continued to keep me busy for the evening, the night and even the morning. I landed six in total, they were big bream with some close to double figures, none were photographed and all were unhooked in the margin but for an angler targeting them it would have been a fantastic nights fishing.


We packed down camp somewhere around 10am and were caught in a tremendous downpour just as we got to the cars, 30 seconds earlier and the gear would have been dry! After leaving the pit we headed for the café and to meet up with another forum member, TT. He had just finished his breakfast but chatted to us while we had ours. We left the café after a hearty breakfast, visited the butcher for barbeque delights and headed off to the pits for our grand tour. Baity, Jimmy and Kempy led the way with TT and I in tow as we visited various pits, some were massive, some were smaller but equally as delightful. How these guys decide which one to tackle first is beyond me. Our tour guides pointed out various things along the way, it was information overload as the place has so much history and I can’t now remember which pits are which on my camera, but it matters not. They are all wonderfully unique and each one has its own charm. You can’t help but to be a little envious of what these guys have on their doorsteps, but it’s a way of life down there, not just fishing but as I’ve said before, a group of lads with a passion and desire to protect the place they call home and ensure things remain unspoilt for years to come, and I respect that a lot. The time and effort they put into fishing the pits is second to none and the results they have are well deserved and celebrated by all, a proper little community.
A selection of photos from the Colne Valley Pits 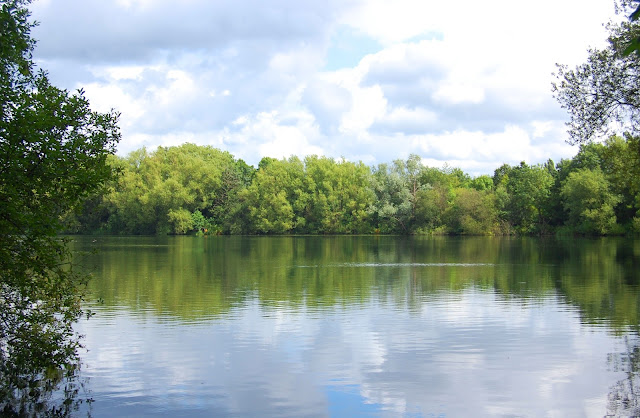 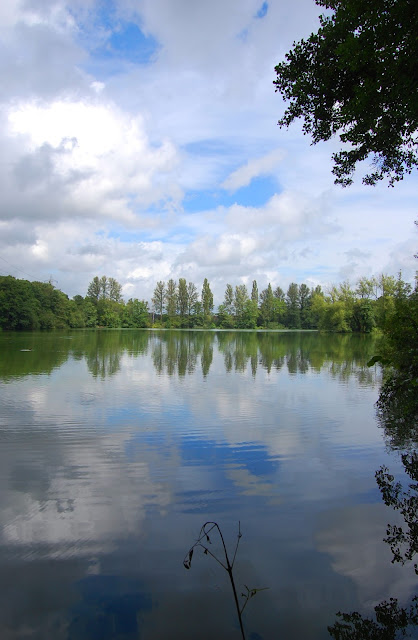 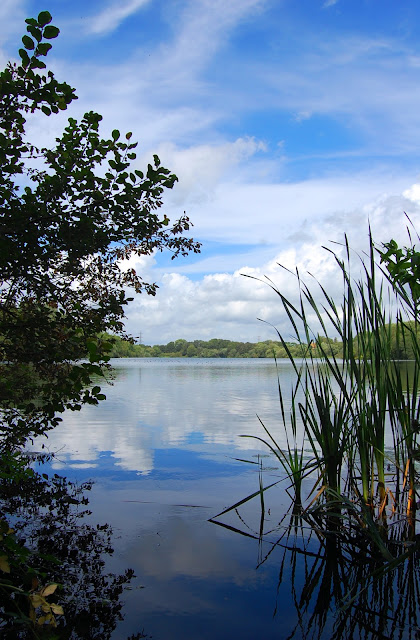 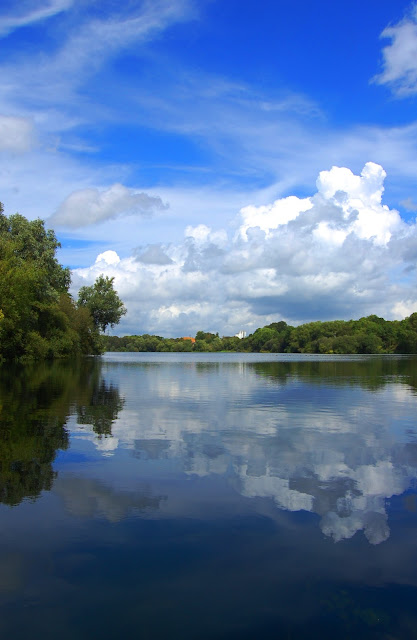 After the tour we visited the local pub, The Horse and Barge. Here we met other forum members and much laughter, drinking and banter was had. Our great afternoon in the sun ended at around 6pm and, as we bid a fond farewell to those heading home, the rest headed to Pit 2 for the evening festivities and some more angling. Just behind us was the canal and just beyond, visible through the trees was the mighty Savay Lake. We didn't get time to visit Savay or see much more than a glimpse of her waters, but I hope to return someday and complete the tour. Pit two was large, very large and very alien to me. With H2O covering around 52 acres with a sailing club in residence and a reputation of being very tricky I wasn’t expecting to catch much, but I tied up some rigs I thought might suit the terrain and blasted them out away from the party as far as possible. With the brolly up and rods out it was time to crack open a can, get stuck into the barbeque and enjoy the evening with my new friends.
Everyone had a nickname, they varied quite considerably, but one that came up a lot was Toby. For whatever reason various people were called Toby and even I was privileged enough to be called Toby a few times, which was nice and made me feel even more welcome. We laughed, chatted and entertained ourselves until late and finally everyone started to make their way to their respective swims to get some much needed rest. The moonlight over the pit was amazing and I snapped away for a while in the hope of capturing the spectacle on my camera.


I woke to a misty morning, much birdlife was present and the sky was a mixture of clear patches and grey clouds. Drizzle came in waves and at 10am with everything packed away it was time to leave the Colne Valley and head back to reality. I thanked everyone for being so hospitable, for welcoming me into their special little world and for inviting me back again, something I will take them up on when things in my life calm down a little and spare time becomes more readily available. So big up to the Colne Valley carpers, legends of the carping world who love nothing more than to fish in their own way away keeping themselves to themselves along the way. I was lucky enough to get an insight into life behind the green gate, and I’m so pleased I did.
Thanks fellas…….
Posted by The Sweetcorn Kid at 10:32