We suggested it was time for a board meeting, the Traditional Fisherman’s Forum was approaching its first birthday and after an extremely successful year it was time to get together, bounce a few new ideas around and reflect upon what had been a surprisingly good first term. We could have met in a pub or at one of our houses but the idea of wetting a line appealed more so a trip to Fernhill Farm for a day’s angling was arranged and eagerly anticipated.


We arrived at Nigel’s house around 8am and were greeted with tea and pain au chocolate. Our light breakfast was consumed and we headed off for the three mile journey to the lake. The lake was beautiful, unspoilt, overgrown, pretty and very quiet. Carp were to be the main target, along with a chat about the forum and various stops to ignite the Kelly Kettle. We found a nice area to set up base camp, a brolly sheltered the things from the early morning showers and with the rods tackled up we all set off to find a carp or two. I opted for the B James Mark IV and my newest acquisition, a Penn Ultralight Spin Fisher.
The first action came to yours truly, a mirror carp was tempted to a floating bait but a hook pull occurred and it took another hour before another was tricked and landed. A glorious looking mirror was photographed, not a large fish but an extremely pretty example.
We fished on for a while longer but it seemed the carp would be tricky to hook even though they were starting to show an interest in the surface baits we were introducing. We broke for tea and a chat and as we did the showers subsided and the sun began to break through intermittently.
Soon after our break I headed to a new spot, just past where Mark was fishing. The island came close to the bank and overhanging trees looked very inviting. I fired out some mixers in various places and waited for some action. After a few minutes fish appeared and started to feed. It took a while to tempt on into taking the hook-bait but I eventually had a small common charging around trying to free itself and Mark was on hand to snap away with his camera.


I tried a few other spots but returned to where I’d caught the common as there was still evidence of fish in the area. Using the same tactics which tempted the common I hooked another fish, this time a mirror and another very good looking fish was brought to the bank. Jeff did the honours with the camera and it was time for a change of scenery, I left Jeff and headed to another of the three ponds to try my luck.
On the adjacent pond there were already two anglers other enjoying their day out. One particular bank was receiving the brunt of the wind, a perfect area to try to temp a carp to the surface. I introduced a few handfuls of mixers along the near margin and stood back waiting for a sign. That sign came quickly enough in the shape of half a dozen carp feeding on the bait I’d scattered around, it was just a case of selecting the biggest one to cast to. One mirror feeding just under the outflow pipe look decent enough so I gently lowered my hook-bait into the water and watched it disappear into its mouth. The battle was a long one with the fish not going far but hugging the bottom swimming round and round making my arms ache. I netted the fish after a lengthy fight and Mark came along to photograph it for me.

It just so happened that soon after Mark hooked his first fish of the day, and a very pretty one too.

Mark’s fish came from the third pond, the old match lake. I fed where I’d caught the mirror but it was evident that I’d spooked the shoal so wondered if I might be so bold as to try on the match lake and catch one from each pond. A brief look around and a biteless ten minutes to Mark’s left resulted in me spotting some disturbance just opposite near some pads. I quickly made my way around to where I’d seen the activity, lowered a hook-bait next to the pads and soon had a small mirror carp on the bank. Misson accomplished.

Another break was had and more tea was consumed along with sausages and cake. After our “meeting” was over I re-visited the area on the end of the wind to see if the carp were back in the area an hour after the previous commotion. They were and I soon had them rising for mixers once again. Another mirror carp was hooked and landed and slipped back without too much fuss.
I found some carp cruising around another part of the main lake and one looked to be a good one, much bigger than anything else I’d seen all day. I fished for it and its friends for a good hour but it was as if they’d wised up of were content with just following each-other around and not feeding. It was time for me to head back, a two hour drive and a hungry wife meant I couldn’t see out the rest of the day. But it was a great time spent with friends at a wonderful place. It was 5pm anyway and I’d had a successful time so leaving wasn’t too much of an issue. Mark left at the same time as me but Nigel and Jeff remained at the pool for a few more hours and enjoyed some sport as the day began to get cooler. 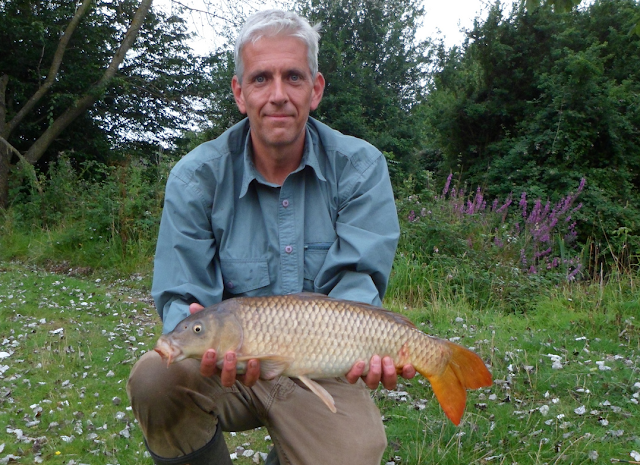 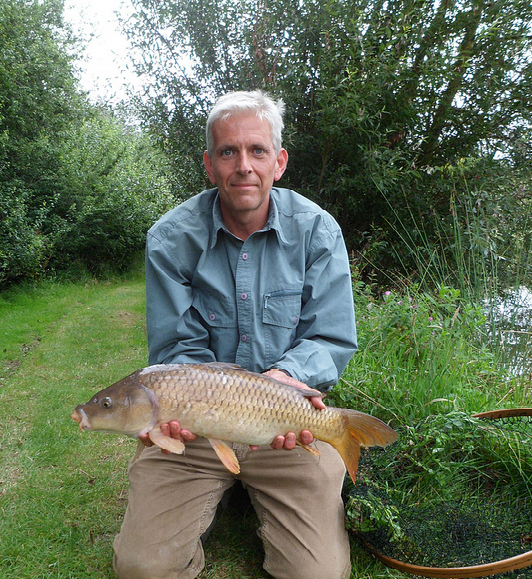