After the excitement of last weekend at Headlands and a hatful of fish, this weekend I was looking for something quieter, a bit more off the beaten track and the chance of something a bit different pulling my string. The season change had taken a firm grip and with dark, cold morning becoming the norm now I didn’t much fancy an early start. I was still within the warmth of the kitchen preparing a flask at seven am, a time when I’d usually have been fishing for a couple of hours already. I set off for the Koi Pool and arrived to an empty car park at just after eight am.


The ticket man’s dog greeted me with a wag of the tail and a wet nose. I paid the man and headed off across the grass past the stock ponds and across the small rickety bridge. Standing at the edge of the pool I was just a little disappointed to find the water very coloured due to all the rain we’d had. I should have known really, but hoped it would be so bad. You see, the appeal of this place, being stocked with Koi, is that the up close in the edge stalking is so exciting, white and yellow carp patrolling the margins making for heart-stopping moments as they approach the float and the water around starts to rock. Take away this element and it becomes any other fishery, and I like each one that I fish to have its own special trait. Having said this I was there, had paid my money and driven around fifteen miles, at least it was worth a go.
After two walks around the pool and only seeing one fish I settled behind a bush that produced for me the last time I was there. I set up the Mark IV with the Aerial and attached a small quill and size six hook to the line. A handful of freebies went onto the spot followed by two small wriggly worms. The float sat there looking very splendid but for half an hour it never moved. I wound in, went for another wander around the pool a couple of times and settled upon moving further down the pool next to another air sized tree which reached far out over the water, they just had to be hiding under here.

It was a little frustrating, I know it shouldn’t be, but when you build yourself up for something, no matter what it is, you can’t help but to feel a little dejected when things just don’t go to plan. The second spot was much the same as the first, the quill tip sat deadly still in the calm water, only rocking when a coot or moorhen swam by. By 10:30 am I’d had another walk around, didn’t spot anything so packed away my things and headed back to the car park. It was a shame; still nobody else was there, the place to myself. But if it just doesn’t feel right and your heart tells you to be somewhere else, you have to follow it.


In the car I was still wondering where to go; with the best part of the morning already gone I didn’t really have too much time to turn things around. The obvious choice seemed to be Carron Row Farm, not too far away, always good for a bend in the rod, always an unoccupied bush to sit next to with a carp or two hiding beneath. So I arrived and found the two swims I had in mind were free. I carried my things around, baited both swims and started fishing next to the brambles in the left hand swim with a chunk of luncheon meat. 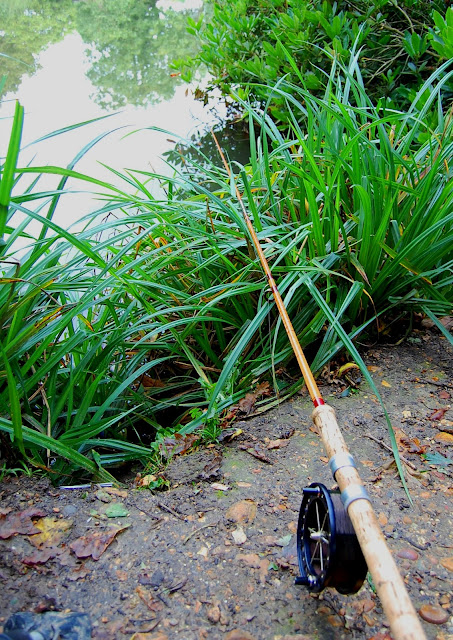 After two missed bites (due to me completely ignoring the float and watching squirrels) I moved to the right hand swim and continued to angle there just out from the rhododendron bush. Another two missed bites occurred (a magpie and a robin this time) but it was nice sat there, drinking from my flask, munching on my sandwiches and generally chilling out. I was under no pressure, Carron Row is so familiar to me I feel I can relax properly when I’m there. I moved again later in the afternoon, along the causeway as there were a few fish cruising in front of the reeds. A watched some lovely carp ‘mooching’ about just off the reeds but they weren’t interested in feeding on anything.


One hooked fish, probably a bream, fell off and that was the extent of my action. But it was a lovely afternoon sat at one of my special places with friends around me both human and animal. I bid the pool farewell, loaded the car and headed for home. I think I shall go perch fishing next weekend….
Posted by The Sweetcorn Kid at 08:06