Easter Bank Holiday: A good start but a bedraggled end

I set out on Saturday afternoon, it was late, after 3pm, but the plan was to assess the situation on a club water I’d not spent a lot of time on before, to get a feel for the water for a couple of hours with a view to returning the following evening for a night session with Daz. I really wanted to fish Thursday night into Friday, but my new membership car didn’t arrive in time.
Saturday morning I took Mum shopping, the post still hadn’t arrived and I had resigned myself to spend another day home and pray that it would arrive soon. But on returning from shopping it was there waiting for me. So I gathered a few things, the bare essentials and drove the 15 miles to the venue. I arrived at the water sometime after 3:30, walked around the middle pond and immediately saw a couple of fish cruising in the upper layers. I tossed out a few mixers and watched as they were completely ignored. I had a brief chat with the only other guy fishing and headed up to the top pond for a gander.  I walked the perimeter looking into the deep margins for signs of fish, but there was nothing there, not until I came to the weedy corner, the pads were just beginning to emerge and the carp were sat, quite happily among the new shoots. I watched and thought about introducing something to see if they were interested, but two mallards headed straight for me and I could see exactly how it was going to pan out. So I left those fish to their relaxing and returned to the middle pond, perhaps I’d even set a rod up.


Just opposite the island I sat a while and watched, a few fish were cruising through, a little too deep for floaters but I tossed a few more out just in case. One mirror in particular caught my eye, a pale sandy looking fish, looking about mid low to mid twenties and taking an obvious interest in what I was doing. I decided to leave him to it and head off across the other side where a fish crashed in the margin. As I got there the ripples were still evident, the silt had been stirred up and a small common swam through the area. I tackled up the barbel rod with 8lb line and a free-lined fake dog biscuit lassoed to the shank, but with a thin sliver of pepperami sandwiched against the stop, just to give that extra bit of smell. I looked up and found two more commons, slightly bigger, passing through the juvenile pads so I flicked the hook-bait into their paths and crouched down out of sight.
Those two commons, both in their teens, seem to take forever to get parallel with my bait and seemed to hang for a while as if to be sniffing, sensing that something was around and trying to work out what. But with a swish of the rudder they continued on their way leaving me with a pounding heart and butterflies in my stomach. I couple more fish came into view but it was as if the other two had alerted any newcomers that there was something adrift. Uncanny I know but it’s almost as if they mark the area unsafe somehow so to warm off their friends.
I returned to my original position near the island channel and saw some more fish cruise through a gap between two weed beds. As soon as they were gone I sprinkled a few pellets into the channel just off an overhanging marginal tree and laid a rig baited with luncheon meat into position hoping to intercept anything else that wandered through, and I hoped that bigger pale mirror would be the first to slip up.
I sat for almost half an hour but nothing else showed, it was as if they knew I was there and were avoiding the area, the area I’d seen anything up to five or six fish previously, vanished! I wound in and walked along to the pond entrance, there was a series of pads there just under a rod length out which looked as if they could hold something, and, sure enough, a shadow cruised through just as I got there. I crept back to my swim, picked up the things and gingerly crawled back into position. Once there I observed for a while without casting and noticed the ads doing a lot of swaying to and fro. I thought at first it could be tench causing the commotion, but a ghostie showed itself followed by two small commons really close to the bank. Although I cast the surface bait among the pads, as I waited I knew I needed to be fishing on the bottom so after a minute or two I wound in, removed the dog biscuit and replaced it for a size 6 hook and chunk of meat.
It was a case of literally lowering the bait off the rod tip, sinking the line and laying the rod down, a few seconds passed and the line began to tighten. I lifted the rod, felt no resistance but did notice a big swirl under the rod tip; I’d obviously spooked something that was just brushing the line. Scratching my head and thinking that I’d probably fluffed any chance of a capture I glanced skywards and clocked that I’d probably only have half an hour left of daylight. Rooting through my tackle box I decided to use a line clip and hair rigged meat, that way I could wait for a more solid pull. With the new rig in position I laid the rod once again on the grassy bank and thought about something to eat. Five or so seconds later the rod tip pulled round and at first I thought I’d hooked a tench, but as the fish tore off through the pads doing its best to rid itself of the hook I knew it had to be a carp, and a scrappy one at that. Twisting and turning it weaved its way through the motorway of lily stems with me being dragged along for the ride but by keeping as much pressure as I dared with 8lb mainline I kept in tow and eventually saw that it was a very chubby and pretty mirror I was attached to.
The beauty of having the fish on a short line was that I could use the rod tip to undo any tangles the fish caused with its weaving manoeuvres. Twice I almost had her in the net and twice she rolled over the cord and shot straight back into the pads, but the third and final time I lifted the mesh around her and peered in to see just the sort of carp I’d grown to love, seek and want. By now the other guy fishing came over to see what I’d caught and kindly obliged with the photos. I didn’t weight it but estimated it to be around fifteen pounds, it was rotund, portly even and wide across the back, but quite dumpy. A real character and the sort of fish I could never tire from catching, however big they are. 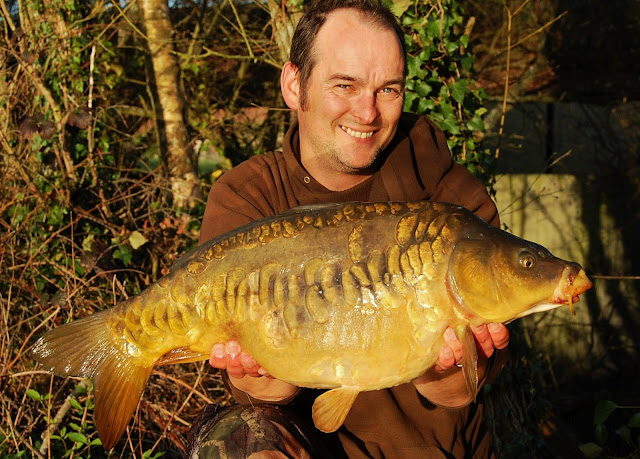 I sat and watched the sun dip for the final ten minutes of the day and on the way back to the car I was hatching the plan for the following night, all night on the venue with Daz, we should be able to extract a few more nice fish if we played pour cards right.
Sunday 8th April
After a meet with friends at the seafront all day I’d arranged to meet up with Daz at 4pm and head for the pond. We arrived and were horrified to find bivvies, lots of them, enough to make us have to think of alternative venues and with Carron Row just around the corner it seemed the obvious choice.
After a quick chat with John who was stalking pond two, we ventured onto pond three and were delighted to find nobody fishing. The swims were chosen and whilst baiting up, setting up the homes and tackling the rods we spoke about the prospects of the coming night and following morning, but all the while we were a little disappointed that we weren’t fishing the intended venue. From where we were fishing we almost had the whole pond covered, and anything we missed was baited up for stalking opportunities later on. We were confident of something, early evening, through the night or even early morning, but with rain forecast it wasn’t going to be a smooth ride.
John came to say hello before he left and with the arrival of Dave and Chris, we had a nice little social well into darkness, drank tea and had a giggle. After they left Daz and I sat and drank more tea until about 11pm when we retired to out sleeping bags, soon after lying down I heard the first of the raindrops on the brolly roof and a carp crashed somewhere in the darkness.
I didn’t sleep soundly, I never do waking every hour or so for a little look around, a pee and to wonder why the rods hadn’t moved. Eventually it was getting light, and by 7am I could see without the aid of the head-torch, but the rain continued, persistent and very wet. Over tea we amused ourselves but imitating the various wild animals, mimicking the sounds our feathery friends were making, and we were particularly good at the mallard! At one stage, after checking and re-checking all the baited stalking spots, re-casting the rods and wondering just why it was so very slow, I retracted Excalibur from under my bed, knelt down in front of the rods and whilst resting the blade on one of the buzz bars I muttered those fateful words.....”Arise Sir Bobbin!!” But nothing happened.

At ten thirty I fetched the car and as we packed the wet things away we stayed upbeat, we’d had a great time even if it was a blank for the pair of us. We’d be back to put things right another weekend, that was for sure, but for now it was a time of getting home, getting dry and warm and spending the rest of the day and the Bank Holiday weekend doing nothing and recharging the batteries for the return to work tomorrow.
Posted by The Sweetcorn Kid at 16:10